During our first week in Vietnam, we awoke to commotion on the street below. Upon arising and looking out the window, we could see a colorful tent being set up below, and a boom box played Vietnamese pop music to accompany its raising.

Later in the morning, one of the Vietnamese artists told us it was for a wedding celebration that day. Today?  Last time we checked, it was Wednesday. Doesn’t matter, said our friend, today is the wedding.

As it turns out, and as we were to learn later, the concept of “weekend” is just beginning to take hold in Vietnam, and mostly with young people. As a culture rooted in agrarian values and necessities, many Vietnamese work a seven day week, without ever having a break, except for Tet holiday or something like this, a wedding celebration. Schools and many businesses are open Saturday morning, with many people getting the afternoon and Sunday off, but not always. So the weekend is an idea about to have its recognition, and the youth couldn’t be more pleased about it. Since most Vietnamese love a party, that part of the week seems like a good time to have one.

But weddings, and the day they occur, have an interesting back story. Some weddings in Vietnam are still arranged, although that’s becoming less common. Parents still put lots of pressure on daughters to marry and have children, but that is also fading into history. Educated women are leaving the country to get away from this kind of pressure; we currently know several young women who took this path to build their careers without the family “when are you getting married” mantra running in the background, and we know others who are planning to. But for those whose big day is approaching, here’s what we understand happens for traditional ceremonies.

The daughter and mother go to a special wedding planner, either a spiritual leader or a fortune teller. This person has a way of determining the date, time and place for the wedding. To do anything counter to this advice would be to jinx the wedding. So that means it could be any day of the week and begin at any time during the day, whatever the wedding planner counsels. Then, about a half year before the wedding, there is an engagement ceremony. After that, there needs to be an official “asking of permission” to receive the bride, which occurs a short time before the actual wedding. (This has its roots in the arranged marriage days. The bride frequently ran away because she didn’t want to marry the guy her parents had chosen. So it was sort of a safety valve to be sure the wedding was still on.) 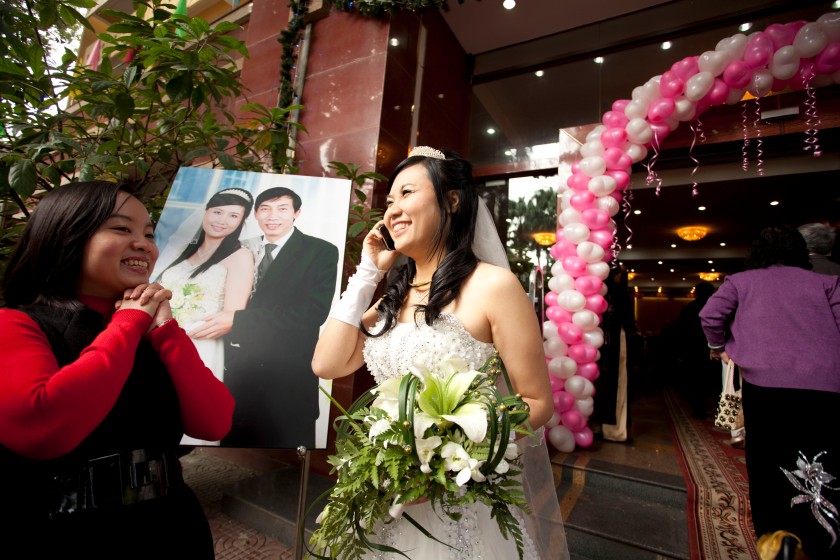 The day of the wedding, the groom’s family forms a procession to the bride’s family’s home. The leader is a representative chosen for the groom’s family (akin to the Western best man), then comes the father of the groom, and the groom. Interestingly, the mother of the groom is often excluded from this procession, symbolically proclaiming that she will not get in the way of the new couple’s lives together. (From our experience in Vietnam, this mother-in-law interference can often be a huge problem for marriages, and all the symbols in the world can’t seem to prevent it. So it’s fascinating that they tacitly admit it’s an issue, while concurrently doing nothing to prevent it.)

The meddling mother-in-law syndrome can be traced far back into Asian history, and isn’t just an issue for Vietnam. The way the family is structured, a woman doesn’t get any say in anything until her son (if she has one) gets married. Because men are in charge in Asian families, she finally gets some modicum of power through her son, and uses it to further his career and social standing. That means she can boss her daughter-in-law around to her heart’s content, and no one gets in her way. The daughter-in-law can only pray that she has a son so she can continue the behavior when he’s grown.

We actually have a close friend, who I’ll call Hien, who is going through this very dilemma. She married a very sweet man, and he and his mother are extremely close, the father having flown the coop early in his life. Sure enough, we started to hear rumblings of trouble when we would invite our friend to visit and she said her mother-in-law forbid it! So, Hien, who by this time had had a daughter, moved herself and her child back in with her parents, and remains there for the time being. The mother-in-law is about to start retirement, and Hien didn’t want to be around for twenty-four hour surveillance. Larry had actually tried to dissuade Hien from marrying; he saw the trouble ahead with this particular coupling, and also saw the great potential of Hien’s brilliant creativity. But, we clearly don’t understand the pressures of Vietnamese marriage rituals, as Hien dove head first into a challenging and stormy situation.

So, when the procession arrives at the bride’s home, the groom’s mother makes her unobtrusive appearance. Gifts inside six to eight (considered lucky numbers) elaborate boxes are presented, and include things like food, fabric and jewelry, and symbolize the wealth the groom’s family will bring to the situation. Firecrackers are set off to announce his arrival, her family greets his family, and finally, the bride makes an appearance. There is then the thanking of the parents for raising them, and the parents respond by offering what advice they can for a happy future. The couple burns incense at the bride’s family altar, something all Vietnamese have in their homes. There is a candle ceremony to show the joining of the two families, and the groom’s mother, finally allowed to do something, puts any jewelry that is in the gift boxes on the bride. Since Vietnamese love Western traditions as well, some of them have incorporated rings into the ceremony, something that is quite common today.

Wedding receptions today occur after all the above-mentioned ritual, and are usually elaborate and large, in a tent erected on the street, as we witnessed, or a banquet hall or restaurant. Gifts in the form of money in an envelope are expected, and quite often come close to covering the cost of the wedding.

Photos by Lawrence D’Attilio, www.larrydattilio.com, photographer and author of “The Soul of Vietnam”.

Teaching and playing professionally since the age of 19, Pamela Foard was appointed a teaching assistant position at her alma mater, Indiana University, while earning a Master’s Degree in Violin Performance. Once graduated, she further honed her teaching skills at the Wisconsin Conservatory of Music in Milwaukee, and opened her private violin and viola studio in 1978 in Brookfield, Wisconsin, which was active until her move to Los Angeles in 2014. While at IU, Pamela studied with Italian violinist Franco Gulli and Polish violinist Tadeusz Wronski. She has also studied with Gerald Horner of The Fine Arts Quartet, University of Wisconsin-Milwaukee; Dr. Gerald Fischbach, Edward Mumm, former Concertmaster of the Milwaukee Symphony Orchestra, Piotr Janowski of the New Arts Trio in Milwaukee, and Vartan Menoogian of the University of Wisconsin-Madison. A transplant from the East coast to Milwaukee, Wisconsin, Pamela was barely out of her teens, when her talents as a freelance musician led rapidly to positions as assistant-concertmaster of the Milwaukee Ballet Orchestra, the Wisconsin Philharmonic, and concertmaster of the Green Lake Festival Orchestra (Sir David Willcocks conducting), violinist with Skylight Opera Theater, and under Music Directors Kenneth Schermerhorn and Lukas Foss, the number one substitute violinist and violist with the Milwaukee Symphony Orchestra from 1970 to 1986. Pamela founded an all string, unconducted orchestra, Sinfonia Concertante, in Milwaukee in 1979, and was the Artistic Director and Administrative Director for four years, where she also served on the board of directors. She was also the Managing Director for Milwaukee’s contemporary music ensemble, Present Music, from 1996-99. In 2006, she and her husband were invited to be artists-in-residence in Hanoi, Vietnam for a three month program, where they collaborated with Vietnamese artists. She commissioned a tuba concerto for her son Aubrey (currently a professional musician in the Charlotte Symphony and head of the low brass department at the UCLA Herb Alpert School of Music) in 2008 from Wisconsin composer Mark Petering. In a series of fundraisers for various levels of sponsorship of the concerto, she solicited from donors over $20,000. Pamela has published two books: "Wedding Music Essentials" and " In Concert: The Freelance Musician's Keys to Financial Success”. Presently, Pamela continues to freelance and resides in Marina del Rey, California with her husband, the fine art photographer Lawrence D’Attilio, and their cat Dasher. View all posts by Pamela Foard

This is a text widget, which allows you to add text or HTML to your sidebar. You can use them to display text, links, images, HTML, or a combination of these. Edit them in the Widget section of the Customizer.

An American Violinist In Hà Nội

An American Violinist In Hà Nội